Regulatory threats still looming on the horizon for the staffing industry

More than half of top executives of WEC’s National Staffing Federations members expect a negative regulatory evolution for the next six month period. Belgium, Germany and Sweden anticipates the most negative impact while India, Italy and Mexico foresee better evolution for the sector, according to WEC’s latest Staffing Executive Regulatory Outlook (SERO).

WEC’s Staffing Executive Regulatory Outlook (SERO) presents the results from a quarterly poll of top executives of National Staffing Federations around the world, asking them to assess the likelihood and potential impact of regulatory changes on the staffing industry within the next six-month period.

Executives of 27 different National Staffing Federations have responded to this edition of the SERO poll. 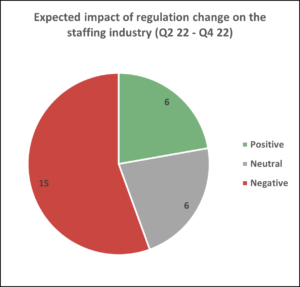 In Belgium, Germany and Sweden, the impact of regulation changes on the staffing sector is expected to be the most negative, according to the SERO poll. In Belgium the main challenge is linked to the use of day contracts, new legislation on tax adjustments which increases the costs for temporary agency work and new obligations linked to the transposition of EU Directives. In Germany, new general working conditions and the transposition of an EU Directive are expected to have a mostly negative impact. In Sweden, there are ongoing challenges linked to labour contracts in the agency work sector, which were already reported for the previous edition of the Staffing Executive Regulatory Outlook.

In India, Italy and Mexico, the staffing industry anticipates regulation changes, which will have an overall strong and positive impact on the sector. In India, labour laws that had remained largely unchanged for over 70 years have been simplified into four easy to understand and transparent codes. The reforms contribute to a better working environment, benefiting the staffing sector. In Italy, an amendment to the law on agency work postpones to 30 June 2024 the application of maximum length of assignments of 24 months for fixed-term missions for workers hired on a permanent basis by the temporary work agencies. While Mexico experienced a drastic regulatory labour reform in 2019, some positive developments are expected in the coming months. The upcoming regulations would give some leeway to the staffing industry to provide services in specific sectors, such as in agriculture and factories.

WEC members can access a more detailed analysis of the SERO results on the Members’ Area.

Find out more about the results of the first SERO edition.